Dissidents of Law: On the 1989 Velvet Revolutions, Legitimations, Fictions of Legality and Contemporary Version of the Social Contract (Routledge Revivals) por Jirí Pribán 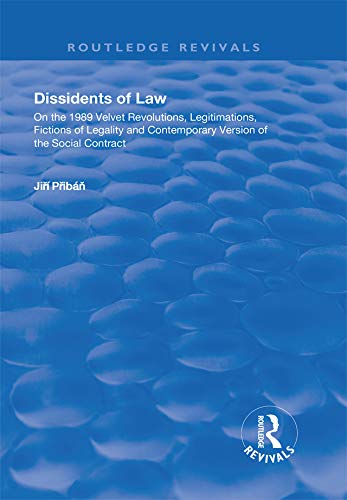 Jirí Pribán con Dissidents of Law: On the 1989 Velvet Revolutions, Legitimations, Fictions of Legality and Contemporary Version of the Social Contract (Routledge Revivals)

This title was first published in 2003: The problem of legitimacy and legality is one of the key issues of modern thought and nowhere more intensely debated than in the countries of the former Soviet bloc. Under the communist system, symbols of modern government had been supplemented and changed in order to serve the totalitarian domination of the Party and all spheres of life, including law, were subsumed within this framework of ideological legitimation. Following the anti-communist revolutions of 1989, former communist societies started the historically unprecedented process of transformation from the totalitarian into liberal democratic society, a transformation which has produced much soul-searching and heated debate. In this book, the author sets out to prove that concern with legitimacy belongs neither exclusively to the legal system nor to a political system separated and distanced from the legal system. The topic of legitimacy and legitimation is inseparable from legality and every legitimation eventually looks for its transformation into legal legitimacy.